My philosophical moments come unexpectedly, and, not often enough. It was early this evening, and, after reading between the veiled comments of text messages, I realized that my friend had once again fallen into a lifeless position on the couch in her home unable to move and unwilling to reach out.  After digesting her situation, I surveyed my living space where I was organizing my gear to take to Dallas for work.  I snapped mental pictures of what is not yet prepped and packed and made a gentle reprimand to myself  that I had a departure drive time of 6 am.  “At least three hours of packing to do,” I sighed under my breath.  “Wash, dry, & pack the coconut oil dispensers, pack clothes, clean the kitchen, return the incoming text messages about appointments, reorganize my office backpack, plan my meals and pack the cooler…” I whispered as I pointed toward each station.  I had a feeling that my sleep requirements would be curtailed.  But, she is my family and her wellbeing supersedes all.

I dropped everything and raced over to her home. In route, I was inspired that the only solution to the situation was to remove her from her living space for however long she needed. I arrived and found her as expected and surrendering to her fourth day of debilitating mental illness. She had kept this from me for three days. “How did I not see it?”  And, while to many, this situation may seem troubling if it happened to someone they loved, her current condition is light years more healthy than it was nearly two years ago.  And, one day, I will write about that.

I sat and tried to be present and quiet. And, though that was my intent, I was questioning, challenging, and mildly disagreeable.  I raised the issue of leaving the house, and, I was met with resistance and a cracking voice.  Finally, she agreed.  I proclaimed that her departure required shoes, a water, and any necessary medications.  She complied with slumping shoulders, slow movement, and a lifeless resolve.

As we stood inside her front door ready to leave, water was gathering in her eyes and I waited for her head to fall into her hands and expected her diaphragm to cue in rapid convulsion. But, she didn’t cry. I could tell she was trying to be strong, not wanting to be seen as weak or to worry me.  And, I suspected that she remembered that I was leaving in the morning to do massage work in Dallas and didn’t want to be a distraction or cause my delayed arrival.

She asked where we were going.  Several humorous & unappealing responses raced across my mind’s eye, but, I dismissed them.  We loaded into my car and I drove toward the bayou not far from downtown Houston.  This area is known for its running & biking trails which wind all around the city and which finally got connected this year.  Throughout this area evidence of art spaces, upscale casual restaurants, a bat bridge, and unexpected visuals of the city’s natural and manmade beauty constantly keep one on alert. These scenes are more pronounced when one is on foot or on two wheels, aka, a bicycle.  And, I have found that the world in Houston sounds different on a bicycle or on foot.

The well maintained pathways lead to modern walking bridges, which, of themselves, are works of art,  My favorite place along these trails are the Tolerance statues.  They are hollowed out Titan sized men kneeling as if in prayer.  Each of the seven are made of  metal symbols and characters from different languages.  Each statue is illuminated from the inside at night adding not just beauty, but, symbolism to ‘Tolerance’.

And, where I landed us was in the parking lot of a new glam restaurant built on the bayou which opened a few years ago. 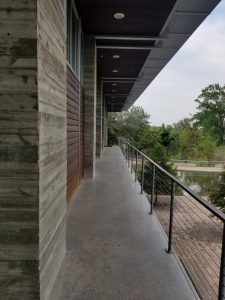 The Dunlavy restaurant shares parking with the city’s park patrons and is a safe and quiet entry point into our nature walk.   It’s a casual restaurant in a very modern building proudly made of concrete and accented with floor to ceiling two story windows.  Actually, except for the west wall, all of the walls are windows which creates an air conditioned gorgeous view of the trees and bayou. 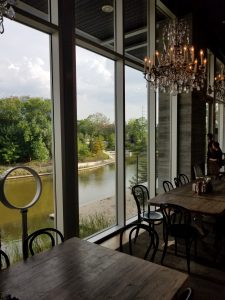 Our nature walk behind the Dunlavy didn’t last long.  She would slow to a stop as if she needed to take a breath to cry.  A couple of times, I pulled her into my chest to offer privacy from public view so she could let out the unnamed sadness, but, gently pulled away and declared that she was not gonna ‘let it out in public’.

“Well, this isn’t helping,” I thought.  So, I insisted we head to Amy’s Ice Cream, a Texas based mom & pop chain.  Once again, we loaded into my car and headed south.  And, just before exiting the car for my FAVORITE ice cream in all the world, she made quite a surprising suggestion:  “Do you mind if we dine across the street to have ‘real dinner food’ first?”   “You’re hungry?!?!” I asked.  “When did THAT happen?”   Internally, I sighed…my fat cells required regeneration – it had already been weeks since they had been fed by the high cow we call Amy.  (There really is a plastic cow perched high above the entrance…and I assume her name is Amy.) 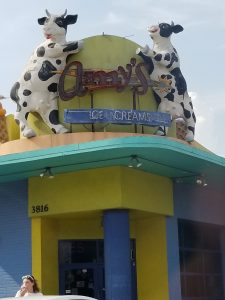 I glanced across the street to see the familiar building which once housed a Starbucks, a vegan packaged foods store, a Diet Gourmet store, and, two other businesses.  Lining one side of the building were giant letters in red and mustard yellow:  THE HALAL GUYS.  “Sounds Greek or Mediterranean,” I thought, “I love that kind of food.”  So, off we went to find legal parking in their lot. 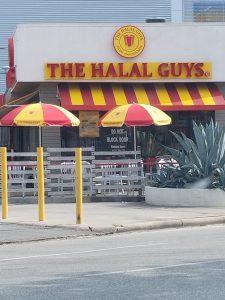 Surprisingly, it wasn’t busy at all.  But, it was so fucking loud.  I wondered if the cooks were having anger management issues given all of the noise they were creating.  After gathering our food, drink and silverware, we sat outside on the patio to feed the mosquitos, but, mainly to avoid the PTSD-inducing sound explosions of metal spatulas on thick metal pots.  I wanted to say, “Is that what that Broadway show STOMP is like?”  But, my thoughts and shovels of food into my mouth were interrupted when she said, “I think this is helping…getting me out is really helping with this bombshell of restraint.”  I looked up in surprise.  Her posture was more animated, her voice sounded like it was powered by her diaphragm, and, though the sparkle in her eye wasn’t there yet, I could tell it was on the way.

She was mostly finished with her meal, but, not before exclaiming several times how amazing our food was.  And, it was very flavorful and completely filling.  I paused the food shovel and blurted out, “well, you know, if you can’t change ‘how’ you see the world, change ‘what’ you see.” Both of us looked up in surprise at the wisdom of those words. “OMG!!  I can’t believe I just said that. It’s so deep and so true and so very simple,” I said. She concurred and asked me to repeat it.

Whenever I can pull her out of the quick sand, it’s a HUGE victory for me.  And, figuring out the way to those victories is sometimes about changing her physical point of view from a routine one to a colorful and moving one.  At the beginning of this story, she never moved her eyes from the white wall across from her position on the couch.  I wondered what movie she had cued up from her past to project there.

Tonight, as I type this story, she is sleeping in my bed.  I insisted that she not be left alone tonight.  And, as I reflected on that sentence “if you can’t change how you see the world, change what you see,” I wonder, if the wise words we speak to those we love are really the words we want to speak to ourselves.   When I spoke those words, it was a spontaneous articulation of my own minor victories when I faced overwhelming depression which spiraled downward into suicidal tendencies.  And, I’d never acknowledged that until that ‘A HA!’ moment with her. 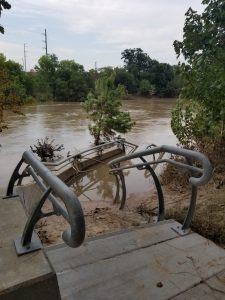 UPDATE to The Halal Guys:  September 5th, 2017 –  Post Hurricane Harvey – After I imported my old website into my new WordPress website, I thought it would be a good idea to take pictures of the nature trails that were part of this blog.  But, they were still under water or still covered in wet mud.

3 Replies to “The Halal Guys”

Address
If I’m advertising in your town, I am either on the way to you, or I’m already there.  Navigate to availability to view my current or future location.

I’d like to acknowledge my close friend Steven for all of the inspiration and guidance he gave me during the construction of my WordPress business website.  He helped me navigate my way through the confusing maze of website jargon.  I have to also acknowledge that he inspires me to keep writing.  When I share with him the jist of a future blog idea, his response or reaction pushes me to the keyboard.